Resolve the problem that modification of tunnel oven temperature control

In order to solve temperature controllers have complex installation, complicated operation and difficult maintenance problem in application of tunnel oven equipment. We propose to use HPE series multichannel temperature controller. The result turns out that meet the requirement of temperature control and can solve above problems at the same time. Also promote products quality, working efficiency and guarantee productivity effect.

The application of HPE series one module with up to 8channel independent temperature control and communication function can be effective solutions to above mentioned problems. Its system framework is described as follow: 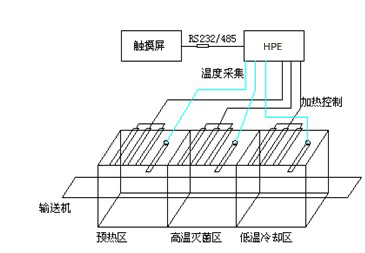 This solution has achieved expected effect in this tunnel sterilization oven system and improved this system’s stability. This system has been running well after its being put into operation. It has been applied on a number of production lines, which improves production efficiency and brings great convenience to users.